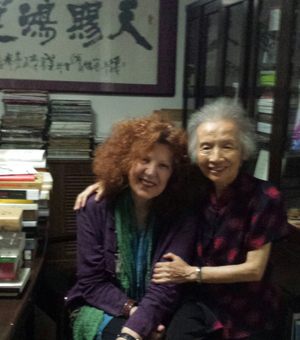 Senior Research Associate of the Contemporary China Studies in OSGA

Professor Maria H.A. Jaschok (PhD London/SOAS) formerly Director of the International Gender Studies Centre at Lady Margaret Hall, 2000-2018, she is currently a Senior Research Associate of the Contemporary China Studies Programme in OSGA, and Supervisor and Tutor for Masters in Women’s Studies. She is holding a Visiting Professorship with King’s College, London, 2019-2021.

Maria Jaschok followed the award of her doctorate with a teaching/supervisory position at Zhongshan University, Guangzhou, enabling her to continue fieldwork in Shunde county in Guangdong. Maria’s decision to live in China for a prolonged period was motivated by her conviction (furthermore receiving theoretical and methodological reinforcement through education as a social historian and, importantly, as an anthropologist) that only a prolonged and deep (directly experienced) immersion in Chinese society would facilitate the desired degree of ‘near-instinctive’ familiarity with a country about which she had chosen to teach and conduct research. That conviction shaped subsequent choices in relation to her academic career.  It took her from a more conventional appointment as lecturer and director of Chinese Studies at Long Island University, USA, where she set up undergraduate study programs in Taiwan and in mainland China, participating in ambitious projects (when she joined Chinese feminist academics to set up a first international women’s college in China, becoming its vice-principal and professor of gender studies,  as well as establish a first Chinese Women’s Museum, where, as its deputy director she initiated a range of research/exhibition projects), and to the directorship of the International  Gender Studies Centre in Oxford,  where she continued participation in international research projects, including China and Southeast Asia.

Maria’s research interests and topics of investigation have most importantly arisen from her many years of research and life in China, derived from close observations of rapidly (and unevenly) changing moral and political economies, particularly in their gendered manifestations and performances, and from the serendipity of (sometimes fateful) chance encounters and random conversations. Early research and writing focused on kinship, concubinage and domestic servitude in the early twentieth century of a modernizing and industrializing southern China, including the British Colony of Hong Kong, and shifted in the course of time and with change of discursive/research contexts to anthropology of religion (Islam), processes of indigenization under female-led Islamic (but also other religious) institutions and the place and marginality of religious identity in the feminist historiography of China. Long years of close research partnerships and friendships in the field engendered interest in feminist theorizing and ethnographic methodology and led to writing on collaborative modes of cross-cultural research and authorship.

Maria’s most recent participation in a team-led research project (supported by a Leverhulme grant) entailed collaboration with ethnomusicologists and anthropologists of Islam in China with an interest in sensory anthropology. Continuing to work with her Chinese colleague of many years of standing, Shui Jingjun, Maria has produced articles and chapters related to the musical soundscapes of women’s mosques and is currently co-editing a volume on Islam in China and ethnography.  She has also commenced work on two books, one is centered on feminist debates surrounding voice, empowerment and silence (utilizing discourse analysis of chants from women’s mosque oral traditions) and the other book entails a return to Maria’s participation in a key moment of Chinese feminism and the attempt by the feminist philosopher and theoretician Li Xiaojiang (around the time of the Beijing World Women’s Congress) to internationalize the HE curriculum and to develop a feminist educational curriculum with Chinese characteristics. (BA/Leverhulme Small Research Grants SRG 2020 to support research for a forthcoming monograph entitled  “An Ethnography of Leadership, Movement and Institution-building; the Personal and Political in Chinese Feminism 1993–1995. The time duration of the award: September 2020 – March 2022.)

Maria is bringing her China research track-record into a new research initiative (based at King’s College, London) on patriarchal carvings of female flesh (Patriarchal Inscriptions), embracing historical and contemporary practices, from footbinding and corseting to scarification, female genital mutilation, body modification and self-harm. The objective is the establishment of a research program including longitudinal research based on cross-cultural as well as multi-disciplinary approaches, uses of multi-media technology and educational applications.

Benedicte Wulff: Gender, ethnicity, and protection: Danish women missionaries in China at the beginning of the 20th century (undergraduate dissertation)

Stephanie Cheng: The state of affairs; precarious relationships and the institution of family in China (MSc, Visual, Material, and Museum Anthropology)

Co-authored with her research partner Shui Jingjun, the study of female-led Islamic traditions in China was published in English under the title of The History of Women’s Mosques in Chinese Islam (Richmond: Curzon) and in Chinese under the title of 中国清真女寺史  (Sanlian Chubanshe, Harvard-Yench'ing Academic Library Series) was followed by a sequel, Women, Religion, and Space in China, published by Routledge. An outcome of recently completed research collaboration on ethnographies of Islamic soundscapes – a study of women’s religious voices, empowerment and traditions of silence in the context of Islamic resurgence in China – will complete the trilogy on Chinese women’s mosques.

Maria is currently finalizing several submissions: a co-edited volume on Islam and ethnography in China (Hawai’i U.P.), a contribution to a Handbook on Islam (OUP) and a chapter in an edited volume on China’s Hui Muslim Diaspora.

Link for a full list of publications (pdf file)

Writing has finally commenced in earnest on a monograph which carries the working title of ‘Gendered Voices and Religiosity in a Chinese Muslim Soundscape.’ Like most early writing, the title suffers from an overly long sub-title, ‘aspiration, sacrifice, resilience, and revival in the expressive culture of Hui Muslim women’s mosques.’ There is a long road to travel before this all sees the light of print! And thus, from en route, a few images from several years of fieldwork in central China, with photos taken by members of a large research group. These are images integral to my writing, affording, I hope, at least a glimpse of an intellectual space that currently so preoccupies me.

Following recent completion of research collaboration on ethnographies of Islamic soundscapes, a study of women’s religious voices, empowerment and traditions of silence in the context of Islamic resurgence in China, the monograph will complete a trilogy on Chinese women’s mosques. It centres specifically on feminist debates surrounding embedded theorization and local histories of women’s voices, empowerment and silence, utilizing discourse analysis of chants from women’s mosque oral traditions. Whereas the first two books were written in partnership and on-going consultation with Shui Jingjun, this third book will carry the heavier imprint of my gaze and thus of its situated partiality.

The images I share come from the final year of research observation/participation in central China. A collective initiative came into being to record hitherto unrecorded chants from the tradition of women’s mosques for a Muslim women’s Songbook of Chants. It became a project in which countless women and their leading ahong from diverse mosques in and around Henan Province participated to ensure as successful and comprehensive a record of their history as was possible. This required extracting women’s voices from an apparently overpowering, dominant patriarchal soundscape. Its purpose, successfully accomplished, was to bring women’s inaudible past within the hearing and reach of future generations.

Silence harbours, so feminist scholarship recognizes, many possible permutations of thought and action. Influenced by philosophies of epistemic injustice as well as feminist and postmodern theorizing of silence and voice, I am asking out of which silence has emerged a history, a culture of sustained belief and female religious identity that by their very presence ask us to query negative assumptions commonly associated with imaginaries of women in organized religion.