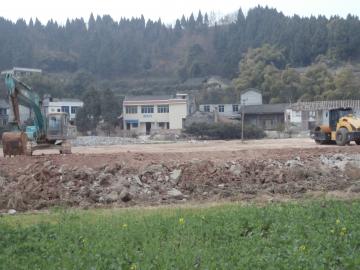 China’s urban population has grown from 172 million in 1978 to 562 million in 2005, when it reached 42.99% of the total population. According to the census in April 2011, 49.7% of Chinese was living in cities, and by now urbanites outnumber rural residents, making China a predominantly urban nation for the first time in its history. One study suggests that by 2025 350 million more people will have moved to cities, and in 2030 urban population will top 1 billion.

This project is the result of serendipity, as urbanisation and infrastructural development spread to affect the village where Anna lived for over a year during her DPhil research (Langzhong, Sichuan). Based on fieldwork conducted over several years, it explores how this process affected the local community, their strong emotional responses to land loss and relocation, their strategic efforts to secure compensation and their hopes and fears for the future. Their responses are a useful lens for understanding how villagers see the local state but also how their whole moral universe is being reconfigured in the face of such momentous changes.

This project involved collaboration with Dr. Xuemei Zhang at the Sichuan Academy of Social Sciences and 3 Chinese graduate students who followed part of the relocation process. It has already resulted in two peer-reviewed publication (Anthropology Today and Positions) and a book chapter. In due course, this project will result in a monograph based on detailed life narratives describing locals’ experiences of land loss, relocation and urbanisation, and how the affected villagers, their livelihoods and sense of self. This work has been presented at the University of Oslo, LSE and at a workshop on New Socialist Villages on the Chengdu Plain (University of Washington).